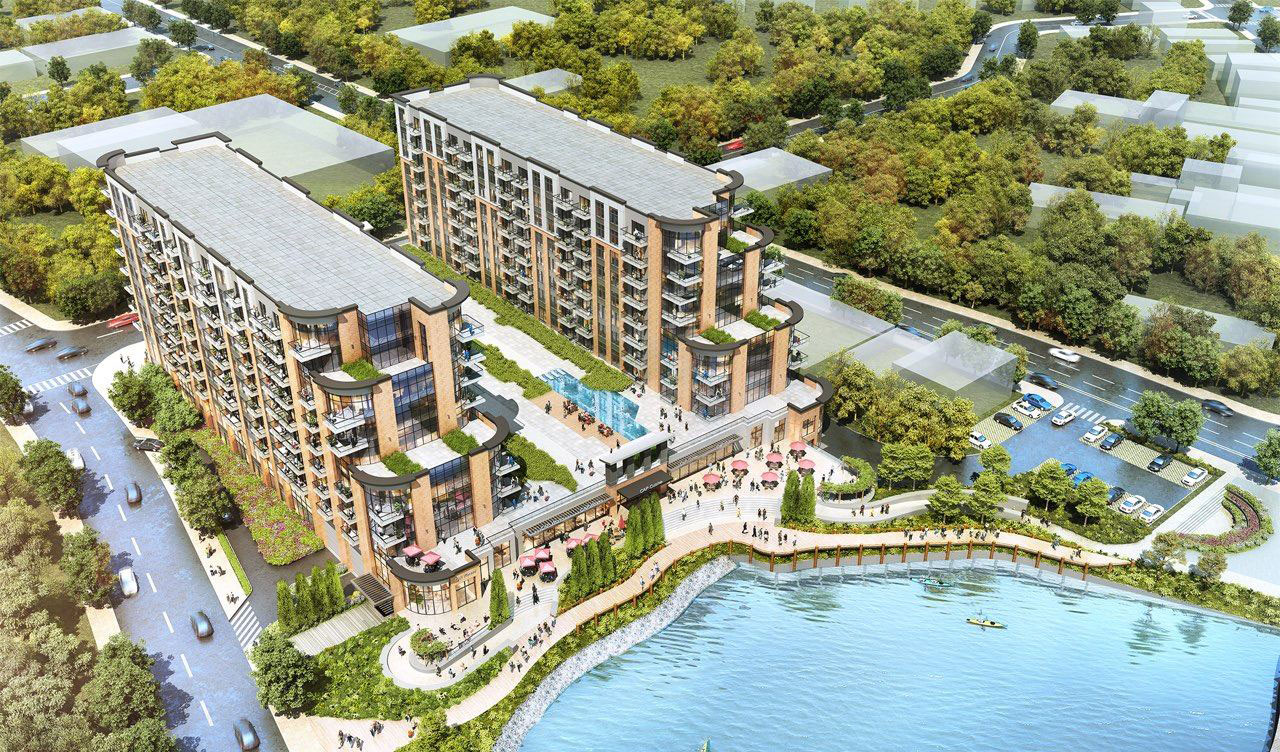 A five-hour-long marathon hearing before the Toms River Township planning board led to the unanimous approval of what will become a transformational development in the history of the township that will cement the vision of the downtown district as a thriving, mixed-use, modern county seat.

The township’s redeveloper of the downtown waterfront, Capodagli Group, presented numerous experts who testified to the suitability of the 10-story, 109-foot tall apartment and retail/restaurant complex that will take the place of a former derelict motel and surrounding properties. The project faced minimal opposition given its scope and transformational nature, with the only attorney formally objecting to the application’s approval endorsing the overall proposal, but lobbying for additional parking for neighboring businesses.

“Whenever we come to a town, there is always concern about who we are, what we’re doing and if we’re going to deliver what we promise,” said Craig Ryno, of Capodagli’s Meridia division, which is behind the development. “We wouldn’t be doing all this work in all these towns without developing good relationships. You can call any mayor of any town we’ve built in.”


Attorney Robert C. Shea, representing Capodagli, pointed to dozens of projects throughout the state, many of which are roughly equivalent to the size and scope of the major Toms River development. Shea said the company boasts a 93 percent occupancy rate and a 98 percent rent collection rate, even during the coronavirus pandemic.

The complex will be modern throughout. There will be no keys; residents will access the building and their apartments wirelessly through a smartphone app that only allows tenants to enter. Employees will be on-site 24 hours per day, seven days per week, including a full-time security staff. The complex will have about 10 employees present at all times, minus two or three who will work in the leasing office, Capodagli’s representatives testified. 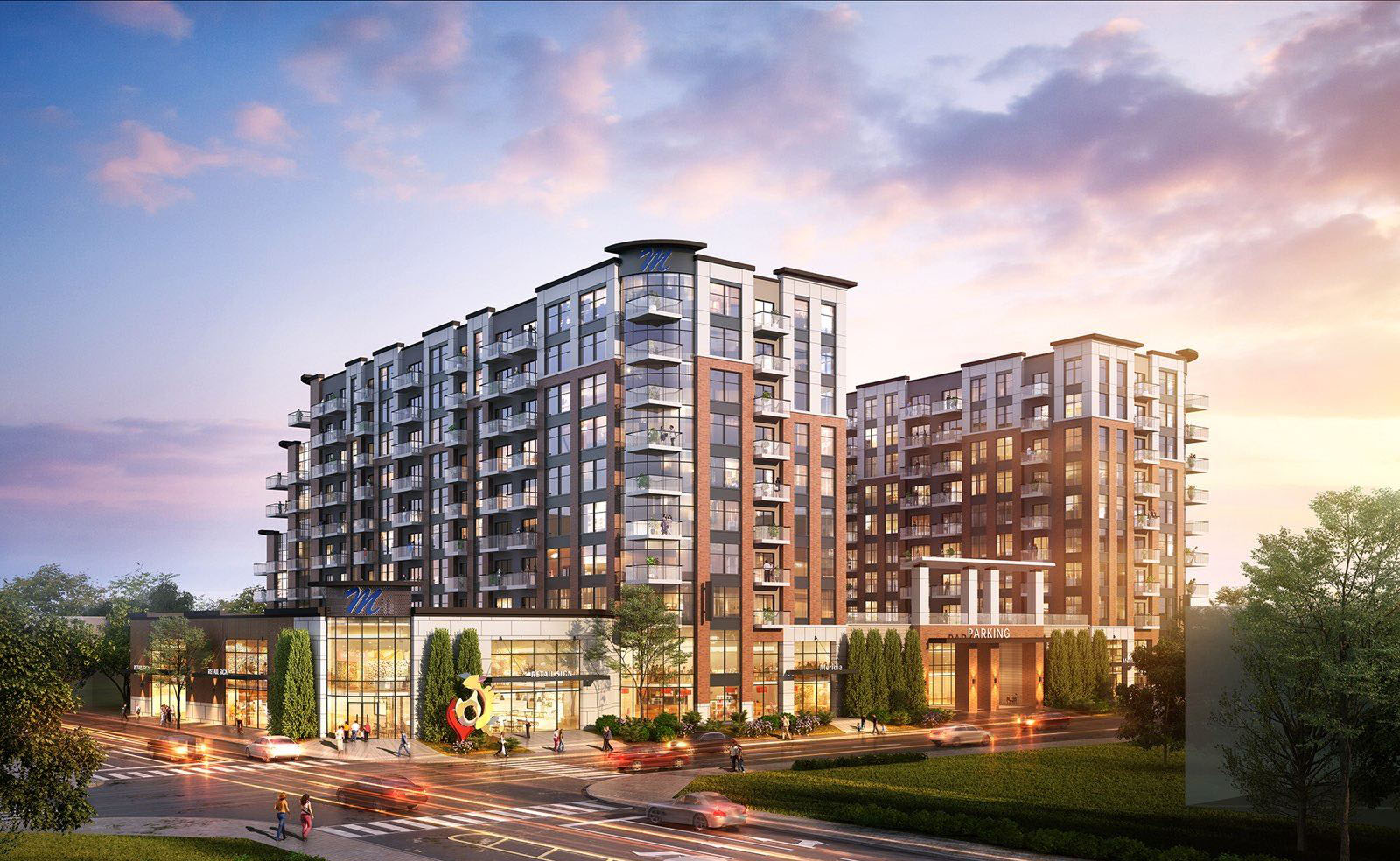 “We would not have included three-bedroom units except for the fact that the state is requiring it due to the fact that it is a redevelopment offer,” said Christiano Pereira, the project’s architect.

An additional 22 two-bedroom units are required to be designated as affordable housing, as well as 21 three-bedroom units that would not have otherwise been included in the two-tower residential portion of the complex. It is rare that families rent luxury apartment units, Capodagli officials said, and it is likely just 30 children – two-thirds of whom will live with their families in the affordable units – will be among the building’s residents. Had the affordable units not been required, Capodagli estimated 11 children would have lived there.

“The units, and the makeup of the units, are not conducive to children,” said Pereira.

The heart of the development is the waterfront, Pereira added, with most residents expected to be attracted to the outdoor setting, nearby restaurants and quick access to the Garden State Parkway once downtown streets are realigned for optimal traffic flow. The complex itself will offer a shuttle bus that will take residents, for free, to the Toms River bus terminal, the county and court buildings, Community Medical Center and some local stores. Residents will have the opportunity to request stops at certain locations, which would be added if demand is sufficient.

The outdoor setting resembles many of the modern waterfront developments in cities such as San Antonio and Tampa. A massive, white walkway and promenade will be open to the public along the Toms River. The water will be on one side and a number of stores will be on the other, including a restaurant that is expected to have an elevated outdoor deck portion. Other businesses are expected to include a pet day-care, laundry service, gym and an additional smaller restaurant or coffee shop.

The two towers that make up the residential portion of the complex will not represent formal “phases,” and are expected to largely be constructed together, said Pereira.

“The podium will be built initially,” he said, referring to the elevated platform on which the businesses will be located, plus benches and tables and chairs.

“There is a sidewalk ramp that brings you directly up to the patio area,” explained Douglas Grysko, the project’s engineer. “We’re still working with DEP. We may end up vegetating all the way to the waterfront.”

The waterfront area, walking path and access to the river will all be open to the public permanently. Landscaping and lighting will be maintained by Capodagli, and the company will work with the Toms River business district to match the lighting to that of the remainder of a planned downtown “streetscape” program for a uniform look. The path will be lit at night, allowing for walks along the riverfront.

Parking presented, essentially, the only substantive concern brought up by the few members of the public who spoke at the meeting. Some said they opposed the financing portion of the project, which conveyed the former Red Carpet Inn property, purchased by taxpayers for $3.3 million, to the company for free. A tax abatement agreement also drew the ire of some residents, but the planning board could only consider the land use aspects of the case. Financing and administrative matters related to the property’s redevelopment were handled by the township council, where numerous agreements were approved by a majority of its members. 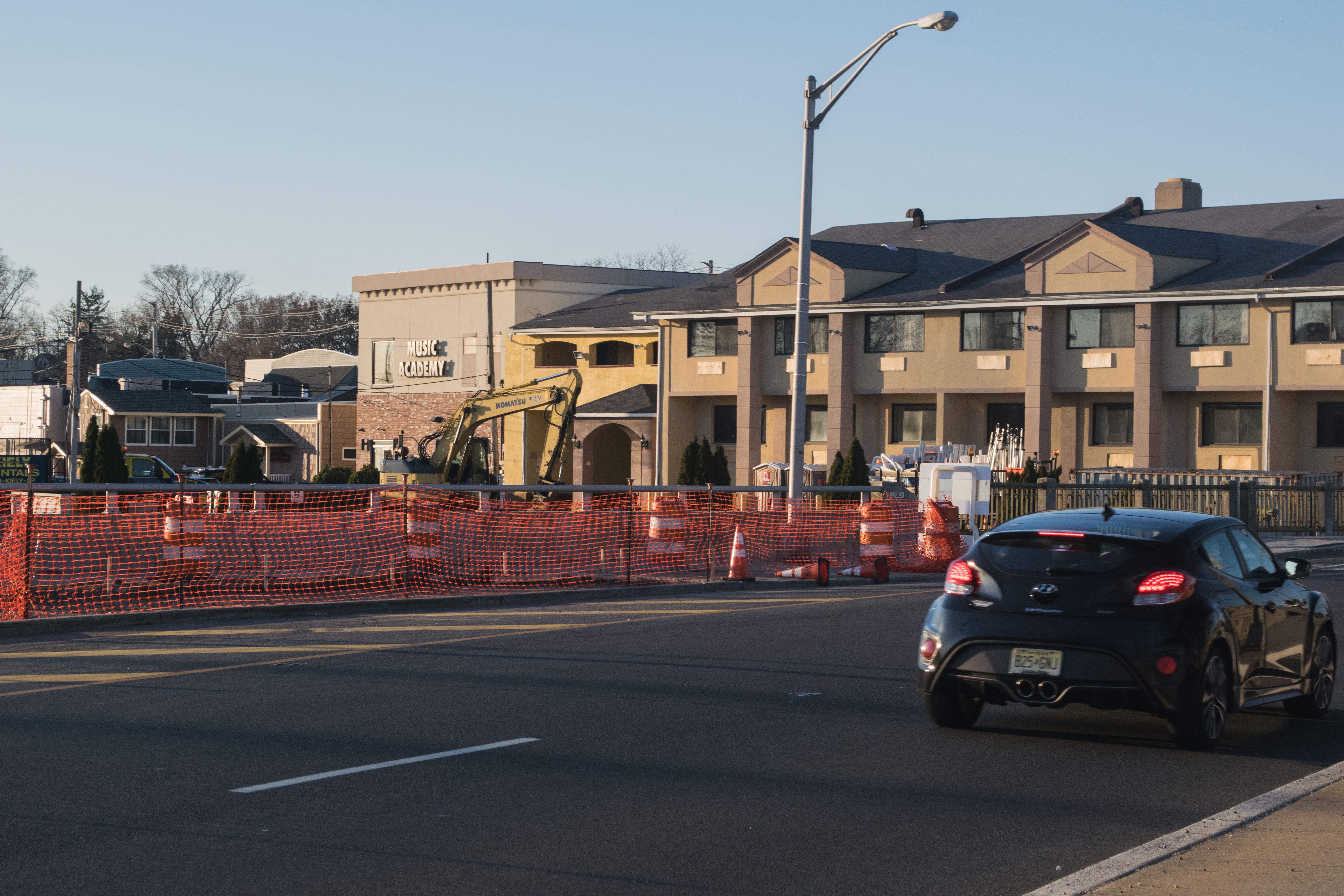 The entrance to downtown Toms River under construction, with the former Red Carpet Motel in the background, April 1, 2019. (Photo: Daniel Nee)

Matthew Seckler, a traffic engineer hired by Capodagli, said the complex was required to include 1.4 spaces per unit in a two-story parking deck. The parking deck will replace a township-owned parking lot, which Capodagli purchased for $560,000, as well as ancillary parking at the site of the former Red Carpet Inn, which was utilized by several neighboring businesses.

Seckler said the final number of parking spaces will be reduced by 25 percent since the redevelopment agreement allows for “shared parking.” Under this arrangement, some spaces will be metered via kiosk during the day, and will be expected to be utilized by residents after hours.

“The purpose of shared parking is so you don’t build excess parking that isn’t used at certain periods of the day,” said Seckler.

Robert Gutman, an attorney representing a tenant of the Seaport Village Professional Center on W. Water Street, argued that the board should have forced additional parking spaces to be added so neighboring businesses would continue to have room.

“We don’t dispute that this is a beautiful project and is needed downtown. This project is good, but at what expense?” Gutman asked. “You’re removing a 220-space parking lot from your community, which is used by my client. He has 40 dedicated spaces he pays for. It’s a service that is needed in this town. It would be a serious detriment to the public and this community.”

The board’s attorney, however, said that voting members were bound by the redevelopment agreement signed between Capodagli and the township, leaving no authority to require additional parking be added as a condition of approval. Capodagli, he said, was compliant with the agreement forged with the township council.

Even with the planning board’s approval in hand, Capodagli cannot get to work immediately. The company is still waiting on a CAFRA (Coastal Areas Facilities Review Act) permit from the state Department of Environmental Protection, an often-grueling regulatory process that has become significantly backlogged since the start of the coronavirus pandemic.

“Once we get into the ground – and I think the biggest delay here will be CAFRA – we’re hoping that mid-summer we might be able to get started with this project if everything goes right,” said Ryno. “This project will probably take about 18 to 24 months to build.”

After the 18 to 24-month construction period, Ryno said he expects it will take about 13 months to market the property to prospective tenants, with full occupancy being achieved within 15 months.

During construction, the work site will be fenced off and there will be a full-time security staff.

Though some board members admitted having some initial reservations about the project due to its size, the improvements to the downtown district, a redeveloped modern waterfront and the ancillary benefit of raising the grade of the area and bringing it into compliance with flood codes, outweighed any negatives.

One board member said the complex, combined with the overhaul of the traffic patterns downtown – projects that are intrinsically linked – will ultimately represent an improvement for motorists.

“In my opinion, one of the ways to reduce traffic is to get people to walk to restaurants, stores, and possibly use public transportation,” said board member Jack Reither. “I think this application helps moves that forward.”

Another board member opined that the project will essentially correct a mistake the township made decades ago, when planners and even the business community focused all of their attention on the development of shopping malls and strip storefronts.

“We literally killed this downtown area, and now we’re bringing it back,” said board member Paul Wnek. “We want to thank you gentleman for doing it. We’re one of the few towns left to have a downtown, and we’re the county seat. It’s time to make it look great.”