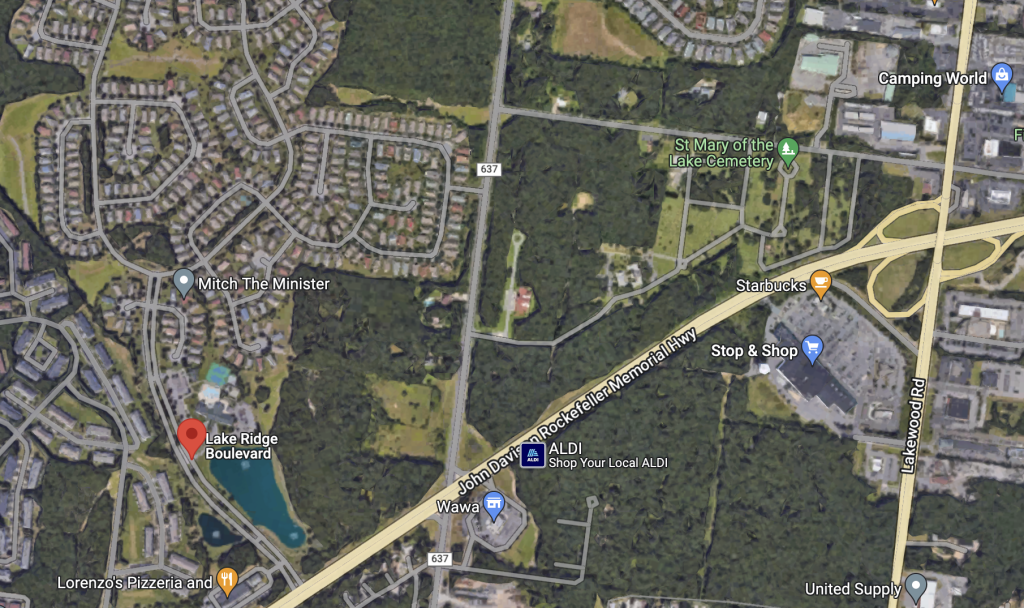 Property sought for rezoning in Toms River, from rural residential to commercial, near the Lake Ridge community. (Credit: Google Maps)

The Toms River planning board on Wednesday recommended a change in zoning to a parcel of land adjacent to an age-restricted community that would allow for commercial development there, leading to a threat of legal action from the homeowners’ association.

The board’s decision, unanimous except for one abstention, does not automatically result in a change of zoning. Only the township council – not to the planning board – can change a zone by ordinance, which requires an introductory vote, public hearing, and second vote for adoption. But it is a first step that has drawn the ire of residents.

The parcel of land is located along the north side of Route 70 near Massachusetts Avenue on a property owned by St. Mary of the Lake Roman Catholic Church for a cemetery and mausoleum. The church is seeking to change the zoning on a portion of the property from “Rural Residential,” as it currently stands, to “Highway Business.” The rural residential zone would allow for the construction of single-family homes and certain other uses such as a farm market, house of worship and a handful of other similar commercial uses, while the highway business zone would allow the property to be used for a wide array of commercial structures. Commercial developers, however, would only be able to utilize 3-acres of the 9-acre plot.


“We do not want to build single-family homes,” said attorney Harvey York, representing a developer with an interest in building on the property. “We are following the master plan and want to do commercial development – not a house of worship, not a flea market. That’s why we’re here.”

A representative from the homeowners’ association for the nearby Lake Ridge active adult community told board members residents moved to the community “with the expectation that it would remain located in the rural residential zone,” and that the organization “may be forced to consider legal action” if the change were to be ultimately adopted. The group is being represented by attorney Joseph Coronato Jr.

The property has a lengthy history, Township Planner Robert Hudak explained. St. Mary’s, at one point, submitted an application to subdivide the cemetery property, which was granted. They had also requested a use variance to use the property commercially, which was denied since the board felt such a dramatic departure from the residential zone would constitute a full rezoning of the plot, which would have to be decided by the township council. Rezoning a property generally requires a resolution from the planning board indicating that the proposed change is consistent with the township’s master plan, which is the question that was posed to board members Wednesday night. Presumably, the township council will take up the issue at a future meeting, at which point members of the public will have another opportunity to be heard on the matter.

The lone member of the board to abstain from voting was David Ciccozzi, who also serves on the township council. Ciccozzi said he was surprised to see opposition from neighboring residents since most of the concerns he hears are from those who are opposed to additional residential housing. In this case, residential housing would be spurned in favor of commercial development.

“If it goes commercial, they will only develop three acres out of nine,” Ciccozzi said. “If you don’t feel that’s appropriate, come to the council and tell them you want more development. We’re trying to do less – we have more open space, more parks, less development. And I’m quite shocked to see this going the other way.”