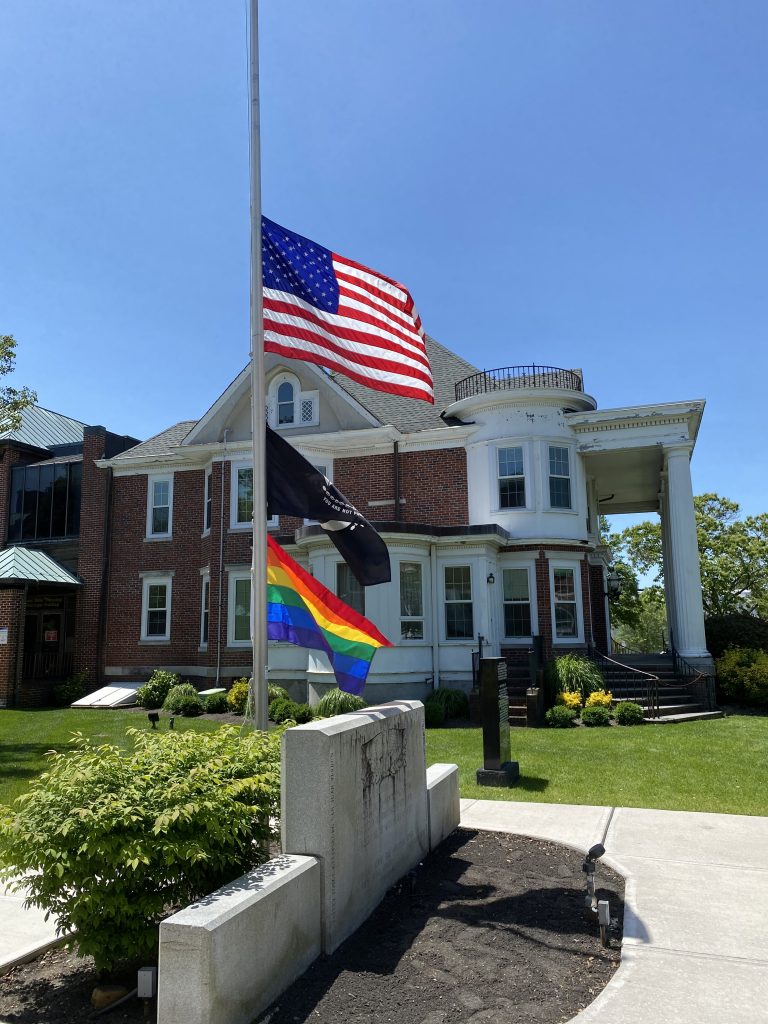 With June recognized as Pride Month, special performances, forums and other events highlighting the LGBQTIA+ community are coming to Toms River.

With the theme of “Believe in Love,” the event is organized and hosted by Exit 82 Theatre Company.

Exit 82 has begun to announce the scheduled performers and activities for the day, which stretches from 11 a.m. to 5 p.m.

It’s free to take part in most of the street fair activities. Exit 82 will also host Izzy Uncut in two performances at its second floor performance space downtown on June 13, tickets are $30 and can be purchased at Exit 82 Theatre Company’s site.

The announcement for the Toms River Pride Festival from Exit 82 emphasizes Unity: “With inclusivity and collaboration at the core of our mission, the Toms River Pride Committee and Exit 82 Theatre Company invite the community to participate in Toms River’s 3rd Annual LGBTQIA2S+ (Lesbian, Gay, Transgender, Queer/Questioning, Intersex, Asexual/Ally, Two Spirit, Plus) Pride Festival,” according to the announcement. “It is our hope that this ever-growing tradition will spark meaningful collaboration that not only benefits the evolving Downtown District, but advances our mission of fostering a safe and welcoming environment for members and allies of the LGBT+ community in the Greater Toms River area and our neighboring counties.”

The festival will feature food, vendors, performances and more. Exit 82 continues to post updates on its facebook page highlighting what festival-goers might expect, such as an appearance from the Golden Gays, of NYC, who riff on the Golden Girls characters. The Toms River Chamber of Commerce has also created Pride-themed t-shirts for sale.

Organizers hope, like in previous years, the downtown area shows its Pride all month with flags, rainbow décor, messages of support and more, as a type of Pride Month Visibility Campaign.

The Pride Month events abound: first up is the Jersey Shore BlueClaws who will host Pride Night at its June 4 game at its Lakewood stadium. Tickets to the minor league baseball game can be purchased here. Additionally, the stadium has just increased its seating capacity after lifting some Covid-19 restrictions. Pride Night, one of the larger theme nights on this year’s baseball season schedule, features special uniforms as well as vendors and nonprofits on the concourse, and fireworks after.

Another Pride Month event downtown Toms River will be hosted by the Mathis Tea House, June 12 and 13. “Spill the Tea” party tickets for either day are $25. Both days will have live violin, tea and scones, champagne and chocolate fountain. On June 12 a live painting exhibit of Victorian models at a garden tea party, by artist Gregg Hinlicky, is featured. On June 13, a paddle auction for original art will take place. Proceeds from the auction will benefit Exit 82 Theatre Company. For more info, call 732-818-7580.

The Ocean County Library has announced a series of Pride Month events, some in-person, others virtual. For example, teen patrons can partake in a Pride Month “make and take” to pick up instructions and materials to craft a bracelet. Many library branches are participating, but the kits are limited, so check in with the teen desk to scoop up.

The Ocean County Library is also hosting “Our Story: A Panel Discussion- PFLAG Jersey Shore” on June 16 from 6 to 7 p.m., sponsored by PFLAG Jersey Shore.
This panel discussion will feature a diverse group of people on the LGBTQ spectrum, as well as parents, who share their personal stories and experiences. There will be an informational component discussing LGBTQ issues in our area and state, and how people can become an ally to the LGBTQ community.

Presented by PFLAG Jersey Shore, a nonprofit organization that envisions a world where diversity is celebrated and all people are respected, valued, and affirmed inclusive of their sexual orientation, gender identity, and gender expression.
To access the panel discussion, log into Zoom meeting ID 870 1283 7506 at 6 p.m. June 16.

Another virtual program for those aged teen and older, will be hosted by the library June 23: “So You Want to Be an LGBTQ Activist?” featuring Austin Greitz, life-long LGBTQ advocate and PrEP Counselor for Planned Parenthood of Northern, Central, and Southern NJ, who will share his experience on how he went from activist to volunteer to intern and then became a leader in the field. To register, visit the library’s Pride Month page.

Additional Pride Month events are taking place June 13, such as the Ocean County Dems’ LGBTQ Caucus hosting special guest Shawn M. LaTourette, for a Pride Festival Brunch. The event has tiered ticketing based on your sponsorship level and aims to celebrate pride and support LGBTQ+ candidates. Light refreshments will be served, for more information contact OceanLGBTQ@gmail.com.