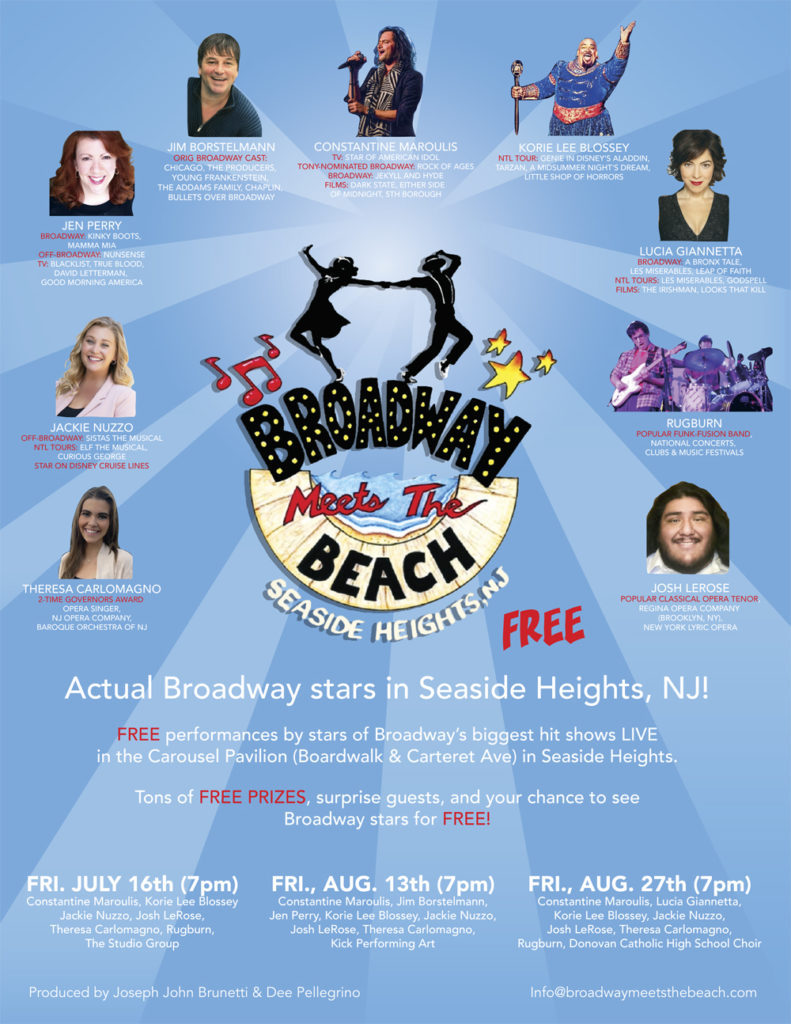 Seaside Heights will revive its Broadway Meets the Beach series this summer, giving Shore residents and visitors a chance to experience world-class theater with the Atlantic Ocean as a backdrop.

There will be three events spanning July and August, according to producer Dee Pellegrino, who worked with the borough as well as Broadway veteran Joseph John Brunetti. The performances will be held July 16, Aug. 13, and Aug. 27, featuring stars of Broadway’s biggest Shows including Rock of Ages, Aladdin, The Producers, Chicago, Young Frankenstein, Kinky Boots, Mamma Mia, A Bronx Tale, Les Miserables – with more being planned.

“After the cancellation of all shows last year, we are so excited to once again celebrate the Shore and all it has to offer by bringing such amazing Broadway talent and music to the boardwalk in Seaside Heights”, said Brunetti and Pellegrino, in an announcement.


The performances will feature appearances by American Idol finalist and Broadway star Constantine Maroulis as well as stage stars Jim Borstelmann and Jen Perry. All performances are free and take place in the new Carousel Pavilion, located on the Boardwalk at Carteret Avenue, beginning at 7 p.m.

“Growing up as a Jersey boy I’m stoked to rock the stage at Broadway Meets the Beach,” said Maroulis. “I’ve been going to Seaside Heights my whole life and it epitomizes summer to me. After a tough year for all of us it’s time to rock out and let it rip with the ocean as our backdrop!”

The shows are still in the final stages of development, but are planned as follows:

“The Broadway Meets the Beach shows are some of my favorite shows of the season,” said Mayor Anthony Vaz. “Having such incredible talent right here in Seaside Heights is something we are thrilled to offer to our visitors for free.”