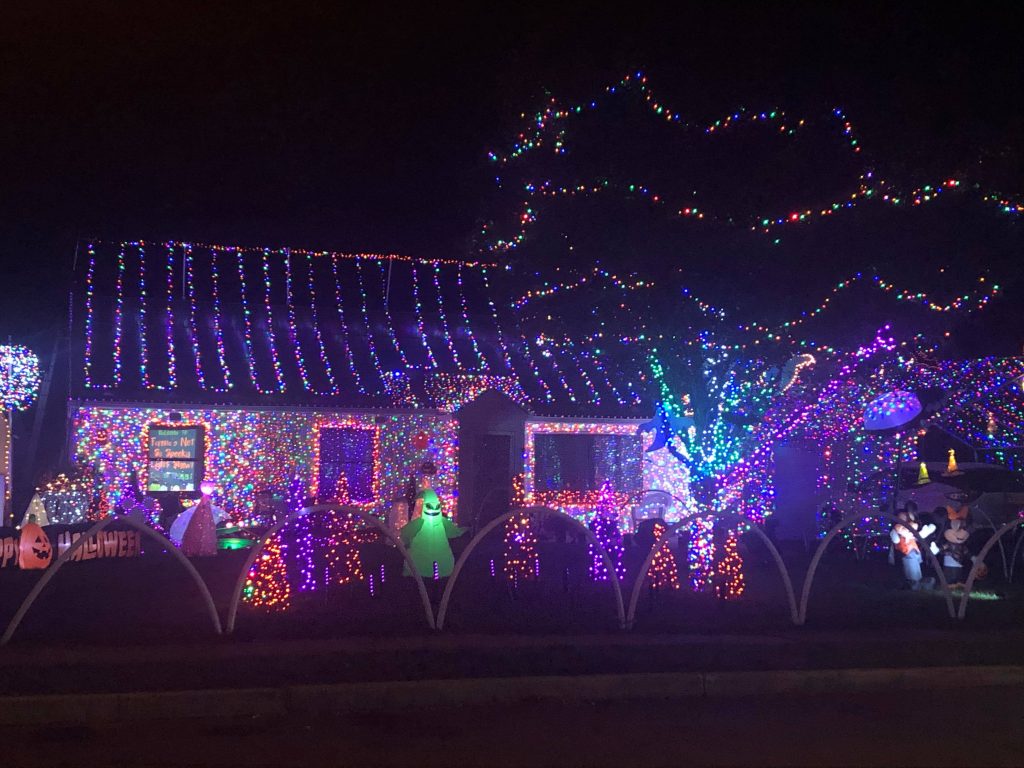 The magic and wonder of Christmas light shows with their flickering, dancing lights set to music have found another holiday to celebrate – Halloween. Local favorite, the Ferone’s of Yellowbank Road, have added a Halloween version to showcase their dancing lights skills.

Now through Halloween night October 31, visitors can drive by the dead-end street for a spooky offering, a 15-minute free light show set to music from films such as Ghostbusters and The Nightmare Before Christmas. 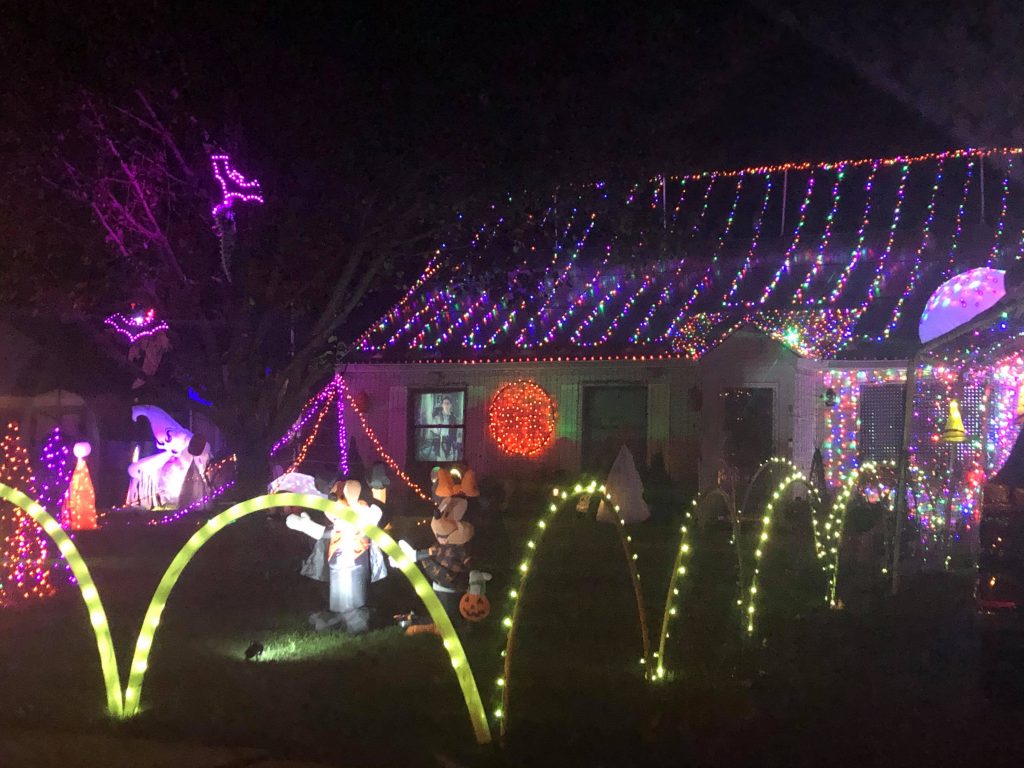 Since 2013, the Ferone’s have transformed nearly every inch of their front lawn, house façade and driveway into an elaborate holiday display with thousands of lights programmed to flash and flicker in time to Christmas and winter holiday classics. Now they’ve added a separate Halloween show using those same programming skills, but instead of Mickey Mouse dressed as Santa Claus he’s got some fangs.

Called the “Not So Spooky” show, the idea to add a Halloween light show was really a “why not?” moment for the family, said Rachael Martingano, Ferone family friend and a lead programmer for the show.

“We start setting up for Christmas the first week of September, so around Halloween we always have the lights up,” she said. “We thought, ‘Let’s just do Halloween too!’”

With the lights in place, all that was left was choosing songs, and programming the lights to move in time to the beat. The family also put up some Halloween décor to add to the aesthetic.

The Ferones are appreciative of the warm reception and success the Halloween show has created, in helping families celebrate in a time where so many activities have been canceled due to the pandemic.

“Honestly we didn’t think it would be as popular as it is. It’s been incredible,” said Martingano. She described that for “opening night” last week, cars were lined up down the residential street for 45 minutes waiting to see the big reveal.

The show repeats every 15 minutes, featuring songs from The Addams Family, Disney and more. It’s free and no reservations are needed – just be mindful of basic residential neighborhood etiquette such as don’t block driveways, hog the road, or be loud or messy. Stay in your vehicle and listen through your car radio, and if you feel compelled to get out and take a closer look, wear a mask for safety and to mind public gathering orders.

There’s also a dropbox to leave a donation – for the Halloween show the Ferone’s are donating to Popcorn Park Zoo. When the holiday show goes live, donations will go toward the Children’s Specialized Hospital. So far, they’ve raised $400 for the zoo and the Ferone’s hope to best their record of $3000 for the hospital in the coming season.

With Father Harry Ferone as the idea planner, son Joey Ferone as lead programmer with his girlfriend Martingano as additional programmer, and lots of hands-on help from siblings, partners, and other family members and friends, the holiday lights come together as a “passion project” for the family that has the neighborhood involved too. Last year’s big holiday show saw the lights stretch beyond the Ferone property lines to the neighbor’s lawns. 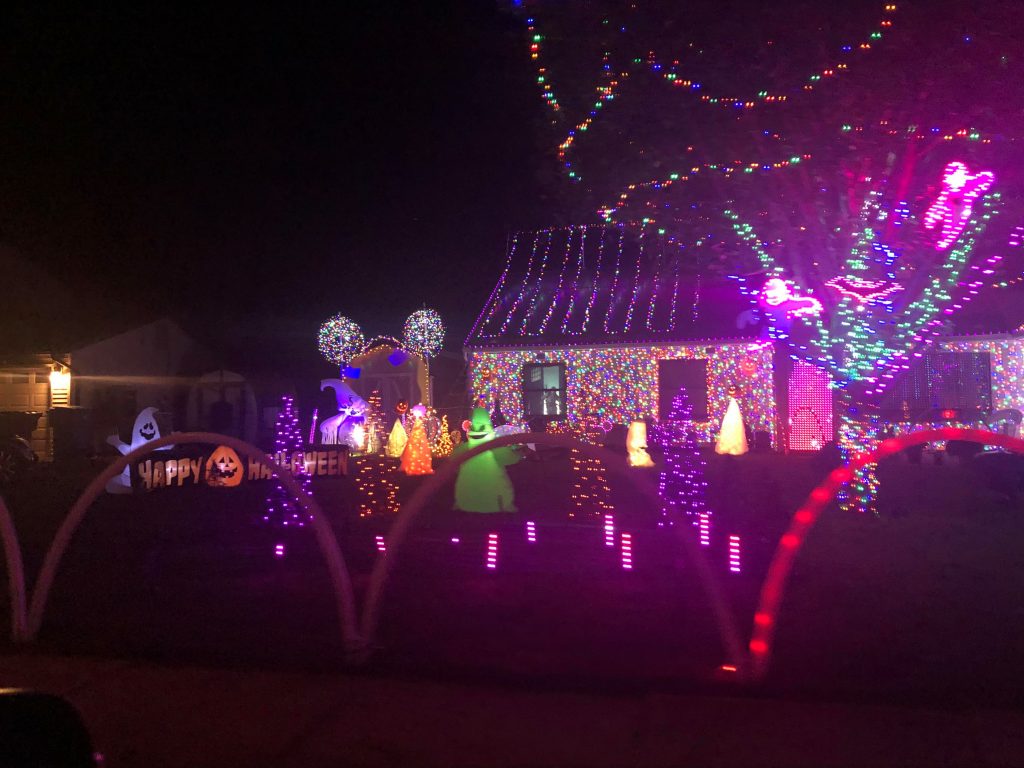 “We have to walk the fine line of making sure we keep it fun for our neighbors,” said Martingano. “We are often mindful that there’s all these cars watching the show up and down the block.” Last year though, neighbors approached them wanting to be involved with their lights. “We are so grateful for the response from the neighbors and the community.”

New this year is the addition of pixel-based animation panels in the windows, to add more entertainment and choreography between the songs and the lights.

Martingano’s tips to enjoy the show, which is 6 to 9 p.m. Sunday through Thursday and 6 to 10 p.m. Friday and Saturday, is to come the last hour and a weekday such as Monday or Tuesday. There’s less crowds then.