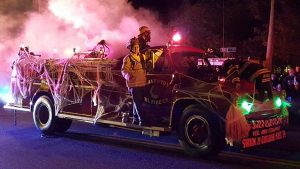 The Toms River Halloween Parade — one of the world’s largest — has to make adjustments this year because the new concrete divider is messing with the old route.

New this year, floats will be lining up on Highland Parkway to make the turn onto Main Street.

That means parade watchers who liked lining the curb of The Office’s parking lot to watch the festivities or who sat north of Highland Parkway will be missing some of the sights and sounds of some of the most elaborate parts of the parade — the handmade float divisions’ participants.

It’s less than one block’s difference in the route, but is a shift over the traditional route to the Halloween Parade.

While lining up the floats is a change from last year and will probably be the procedure going forward, those lining up for the many walking divisions will be exactly the same as previous, Weingroff said.

“Just the mixing at the beginning for floats is different,” he said.

Awards are giving to participants in dozens of categories, whether for best float made by a business or a nonprofit group, or for costumed age groups walking in the parade. There’s also an award for those who are pushed, as one category is for best decorated stroller, for example. A trophy is also awarded for the participant who is the oldest as well as one for whose travelled the farthest.

Getting everyone registered and lined up is a lengthy part of the day, which for Weingroff and his committee of volunteers has meant hundreds of hours spent in preparation. He said essentially as one parade year ends the planning for the next begins.

This year has the obstacle of spreading the word to encourage folks to watch the parade from south of Highland Parkway onward. The new route is printed on the parade registration booklets available at key locations throughout Toms River.

Floats “will stage on Highland Parkway then make the right onto Main Street so we are urging people to sit south of that intersection to give the floats enough room for turning,” he said.

The change was foreseen as a potential problem as early as last year’s parade. Ongoing reconstruction of the Route 37 and Route 166/Main Street intersection has stretched more than two years but in the past two month’s debuted the improvement of a concrete barrier dividing traffic on the southside of Main Street and a new traffic light at Highland Parkway.

This year’s parade is the 80th year for the Toms River tradition. It’s only had a couple years since its founding more than 80 years ago that the parade was canceled — most recently after Superstorm Sandy six years ago.

As in years past, avid parade watchers have left their chairs out the day before to claim their favorite spot on the route, which progresses down Main Street and then turns onto Washington Street before ending just before the intersection with Hooper Avenue. They’ve even chained their chairs to trees to prevent anyone from removing them.

To that end, Toms River parade officials issued their annual “chair warning” earlier October 30: “This is a SAFETY ISSUE,” Weingroff wrote. “As long as your chairs properly secured down so that they do not fly into traffic causing a traffic hazard and are not blocking any driveways or fire hydrants, go ahead.”