Toms River Splash Pad Planned for Skyview Park, Will be Accessible to All 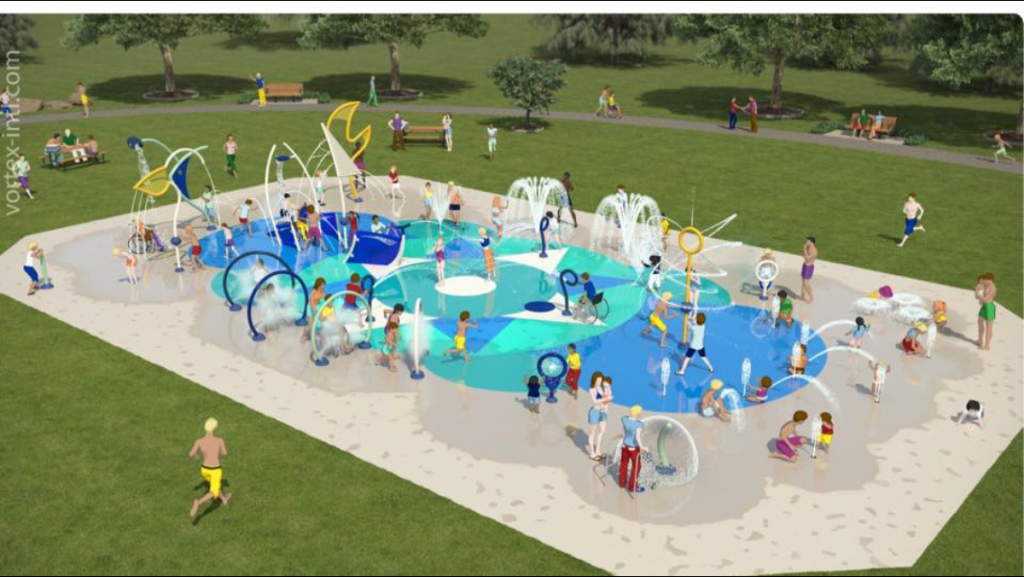 Toms River’s first splash pad and spray park is also slated to be the first in the area to be all-inclusive — that is, accessible to those with physical and developmental disabilities.
The Fountains of Hope project — organized through a nonprofit of the same name — is taking shape at Skyview park, an aging township park on Vaughn Avenue, directly north of Bay Avenue.
Interactive sprays, seats and platforms accessible for wheelchairs, and fountains of varying heights are all part of the design to allow all children to play, regardless of whether they are facing a mobility issue or otherwise.

The township would lease the site to the nonprofit Fountains of Hope, who is committed to privately raising the funds to see the project to fruition.

A splash pad or spray park is not a water park. There are no slides or pools. Locally, there are such sites at Pine Lake Park in Manchester and one near the beachfront in Ocean Gate.


The project is the idea of local families who saw a need for a spray park accessible to all.Erica Cirillo and Joseph Cirillo are two of the board members of Fountains of Hope.

“Our children are Leigha, Joseph and Kristianna. Leigha is 8 years old and has a rare chromosome disease and Retts. Between hospital stays and therapy, Leigha has shown us how to get things done .She is wheelchair bound and non-verbal,” said Erica.”She is our inspiration as well as every child and adult out there that faces challenges.”

Todd Cavanaugh and Deanna Cavanaugh are also board members for Fountains of Hope.

“Our children are Nicholas, Jordan, Kyle, Breanna, Hailey, Kayla, Julie, Brayden and Austin JAK. Austin JAK has a very rare genetic disorder called Emanuel Syndrome. He is 1 of 250 known cases in the world. He’s had 17 surgeries and is the most resilient kid I know,” said Todd.

Children have the superhero ability to motivate families such as theirs to dream projects such as Fountains of Hope, said the Cavanaughs.

“He brings a smile to the face of anyone that enters the room. He loves playing with his drums and all his siblings. He attends a Hawkswood School in Monmouth county. He is non verbal has significant hearing loss and may never walk un-assisted. He is our real life super hero. He and every other special needs child is our inspiration for the park,” said the Cavanaughs.

Creating a place where children who might not be able to walk unassisted feel “normal” to enjoy the same facilities as any other child is a goal of the site. Fountains of Hope could not locate a comparable, all-inclusive public spray park anywhere in the United States.

The Cirillos and their supporters reached out to the mayor’s office, and met with Mayor Tom Kelaher as well as the township engineer and recreation director.

“This is a great project and would be a great asset to the township, for all kids,” said Kelaher. “They’re raising the money…it’s a real win-win.”

The mayor said the township has never had a spray park as part of its municipal park system, and that it was something the public has been asking for. “A lot of coordination is happening with our team, Jared Tate over at Recreation.”

The process of moving the project forward would be a public Green Acres hearing to divert the site as part of a lease agreement with Fountains of Hope.

The township went through a similar process as it moves forward with Field of Dreams, an all-inclusive, special-needs accessible playground that would be built at the Bey Lea park.

Fountains of Hope drawings so far show many levels of interactive sprays and fountains for children to play in. The spray park would be built in an undeveloped portion of Skyview Park, not replacing any existing facilities there. The site has lighted basketball courts, softball field, a tot lot and street hockey.

The Cirillos said originally Deer Hollow Park was an idea for the spray park. However, that park is surrounded by residential lots, where much of the property surrounding Skyview is wooded, meaning it would be less of an impact on the surrounding areas.
With an estimated price tag of $2 million to be raised through private fundraising, Fountains of Hope has previously made fundraisers to reach its goal.

Recently, there was an all-inclusive Easter Egg Hunt at Silver Bay Elementary, and before that a “trunk or treat” at High School East for Halloween.

The latest fundraiser is a “dine to donate” type at Friendly’s on Hooper Avenue, starting at 5 p.m. April 11. 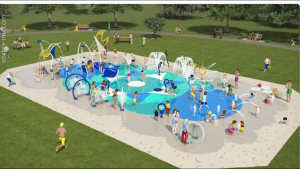