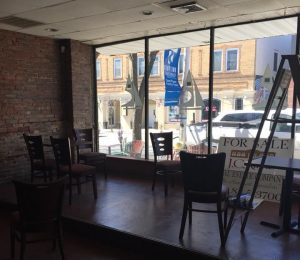 The Hops on Main brewery will be built at the old River Market restaurant spot on Main Street. (Photo by Hops on Main)

The first brewery taking shape in downtown Toms River is aiming to open in time for the Halloween parade, if not the end of the year.

Hops On Main, at the old River Market restaurant spot on Main Street, is positioned to help redevelop the downtown, its partners said.

“My partners and I believe that this area is long overdue for proper redevelopment. We hope to be a part of a revitalization – there is no reason that it can’t mimic Red Bank’s downtown, Manasquan, or Asbury Park. We believe the pent up demand for good restaurants, stores, art galleries, breweries, etc will help the area thrive,” said longtime resident and Hops On Main partner Gary Morrison.


Morrison and four other partners — Ray Carney, Joseph Carney, Dr. James Enright, Bill Enright — are hoping to have everything ready for the big parade on Halloween down Main Street. Reconstructing the former restaurant into a brewery and tasting room is taking shape just a couple months after Toms River changed its zoning laws to allow for microbreweries downtown.

However, there’s also a massive plan to revamp the entire downtown corridor, by adding park space, condemning the Red Roof Inn property and adding multi-use development. Being a piece in what the future of the downtown will look like, it’s an exciting time to build a brewery there, Morrison told Shorebeat.

“The new initiative of allowing residential and commercial redevelopment in the downtown area should be beneficial to both business owners and the town,” he said. “My partners and I are really excited to bring this concept to Downtown Toms River. Downtown holds a special place in my heart as I grew up in Toms River. It used to be the ‘place to be’ in terms of restaurants, gatherings, and stores. The historic feel to the downtown area, the proximity to the Toms River, and the architectural layout is perfect.”

The old River Market spot is being demolished to make way for beer production in the basement and 2,500 square feet on the ground floor for a tasting room. Once open, brewery tours will be available.

Morrison said the 1,900 square foot outdoor courtyard — probably with a pergola, picnic tables and umbrellas — will also be enjoyed by patrons. The owners are seeing if a rooftop area is even possible, but have to consult with an engineer before pitching the idea to the township.

“We plan on having a clean, updated look to the brewery. We will have a ‘shore’ feel to it. Easy colors and the use of driftwood/planks to offset some of the space,” said Morrison.

With 8 to 12 beers planned at any given time, staple and seasonal varieties of beer will be on the menu, he said. “There will also be homemade non-alcoholic drinks such as root beer and cream soda.” His favorite beers are Hefeweizen, but “if you ask the other guys, they are more IPA and Porter guys. But it varies by occasion.”

Morrison said they want downtown to thrive and “to once again be a destination that families and friends can stroll and enjoy a lot of different venues.”

The Hops on Main partners were involved previously or are currently in local businesses such as downtown’s Cafe Enigma, Urner Barry, Crossfit Toms River and community efforts such as the Leukemia and Lymphoma Society.

“We are doing this because we are a group of friends that love the craft beer scene and felt there was a void in the area. The concept has been worked on for over a year now, but we wanted to secure the perfect venue. We really want to share experiences. We want not only Hops on Main, but Downtown as a whole to become a popular destination again. In order to that we need businesses that they want to go to. We believe this will add to it,” Morrison said.

The Toms River Business Improvement District Director Alizar Nick Zorojew shared his enthusiasm for the new business. “We are super excited about the brewery.  Our organization worked with the township Planning Department to alter the land use regulations earlier this year to permit breweries so to have one move in so quickly says a lot about the demand in Toms River for social atmosphere,” he said.

Equipment will start arriving over the next couple months, Morrison said, adding that onlookers can keep tabs on the brewery’s progress on facebook and IG @hopsonmain.tomsriver.