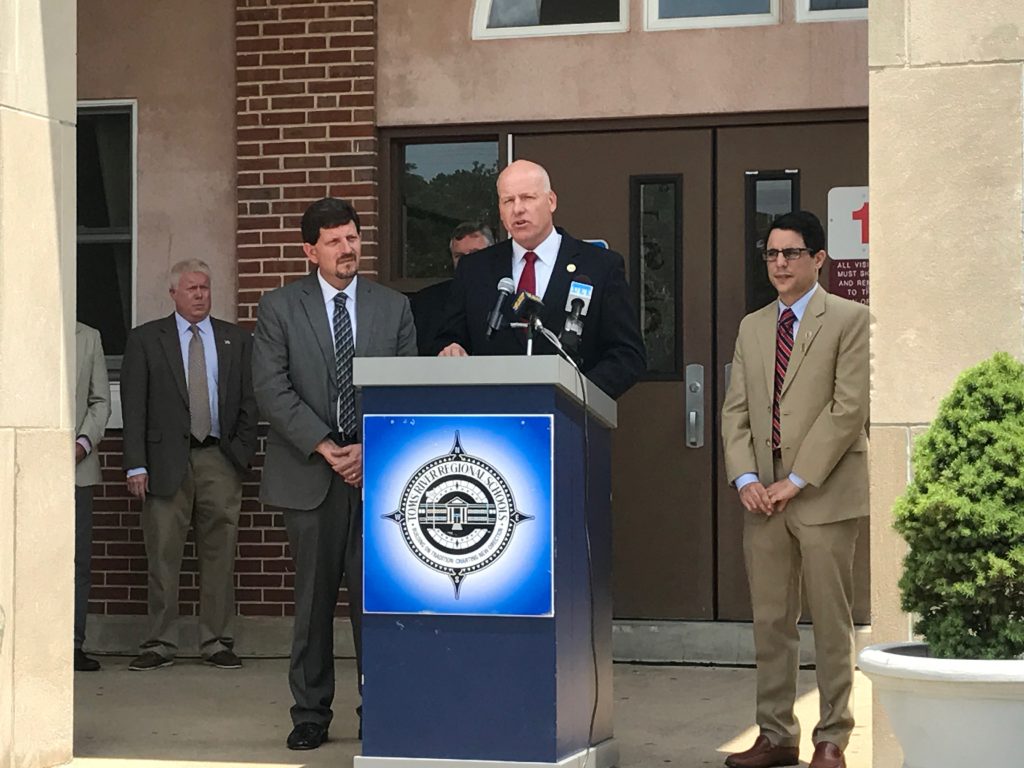 Toms River would see its state aid cut by $3.3 million and neighboring Brick’s aid would be cut to the tune of $2.2 million under the plan hatched by the two Democratic legislative leaders. Most of the officials from both towns who gathered at Toms River High School South on Wednesday called on Gov. Chris Christie, a Republican, to veto the plan if aid is not restored.

“Our school board is standing in full opposition to this so-called fair funding plan,” said Toms River Regional school board president Ben Giovine. “We call on our legislative leaders to work in a bipartisan fashion to find a formula that is fair to all of our diverse districts in our great state. Failing that, we would call on our governor to veto this plan outright.”

“At the end of the day, this was not a legislative plan,” said Holzapfel. “This was a plan that was designed by two people – Senate President Sweeney and Speaker Prieto.”

Holzapfel said out of $140 million in new school spending statewide under the plan, $100 million in additional funds will be sent to Democratic districts, while districts such as Brick and Toms River will see cuts.

Brick Mayor John Ducey, a Democrat, joined GOP elected officials in asking for the funding plan to either be modified to restore the aid or turned down completely.

Ducey said Brick and Toms River residents have already faced storm cleanup costs, a tax base that has not recovered, and were punished with the state’s gas tax increase last year since residents of the two towns are most likely to commute to work.

“Fairness is every single community being treated the same,” Ducey said, calling on Christie to veto the school funding portion of the budget if state aid is not restored.

Students Will Suffer Most

Toms River Regional Superintendent David Healy said the district will send a hundred busloads of residents, students and staff to a rally in Trenton on Thursday to protest the cuts. The district is currently developing contingency plans, however, to prepare for a case in which they are signed into law by Christie.

“We have to look everywhere” for cuts, said Healy. “We have to look at things like … staffing cuts, increased class sizes, pay-to-play for high school athletics, and you look at eliminating sub-varsity athletics.”

“The educational process is far more than just the classroom,” said Healy, conceding that the district would have to “focus on the  essentials” if the cuts were to be enacted.

Also on the table is privatization of some staffing duties, Healy said, without going into detail.

“We don’t want to undo all of the things that we’ve spent so much time working on,” he said.