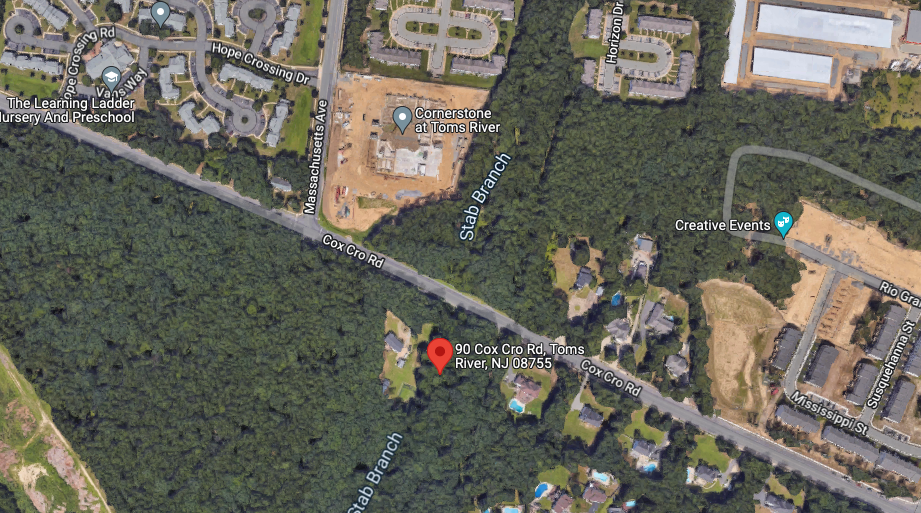 The location where half of a 48-home development was approved in Toms River, Sept. 2022. (Credit: Google Maps)

Toms River planning board members this week approved the first half of what is intended to be a 48-home development of single-family residences.

TR Estates LLC, which public records indicate is owned by Avi Dahan, of Teaneck, gained approval for the subdivision of the property located in and around 90-122 Cox Cro Road. The board voted in to permit the property to be divided into 25 lots, with 24 of those lots reserved for homes and the remaining lot will consist of an open space stream corridor, a substantial of tree area and a parking area associated with a future clubhouse.

The property has a lengthy history of litigation, dating back several years, said attorney Harvey York, representing the developer.


“This property was the subject of litigation between the property owner and the township,” York told board members, summarizing the saga which ultimately resulted in a settlement between the two parties.

The property was originally located in the R200 zone, which calls for 20,000 square foot lots. The parcel, under such zoning, could have acommodated between 75 and 100 homes. At one point, it was rezoned to R800, which calls for 2-acre lots.

“We wound up in litigation and after a year or two, the case was settled, and the township created a portion of the R800 zone that allowed a cluster [of homes] as you see here tonight,” said York.

Essentially, the settlement largely allowed for development that would roughly match the equivalent of the R400 zone, splitting the difference between the original zone capacity and the rezoned capacity.

“On our half, we only have 24 homes,” York said. “Assuming the other half is done similarly, that will be another 24 homes. “This application, with one minor exception, complies with 100 percent of the ordinance. There is one lot in the middle of the subdivision for which we’re seeking variances, and that is because it is a corner lot and we lack frontage on the street.”

The lot that was the subject of the variance request otherwise comported with the elements of the settlement in terms of size. Its shape caused the need for relief.

The property is located off Cox Cro Road in the area of a stream – specifically, the Stab Branch of the Toms River. A drainage basin will be added to the site in order to protect the stream, professionals testified, and the development will have links to city water and sewer service.

Two neighboring residents raised concerns over several aspects of the proposed development – primarily traffic, wildlife in the presently-wooded plot of land, and the activities that will go on in the clubhouse, which will be managed by a homeowners’ association and include 49 parking spaces.

York objected to any environmental testimony, arguing that the project meets regulations promulgated by the Department of Environmental Protection. He also objected to questions on traffic, claiming the municipal planning board had no jurisdiction on the matter since Cox Cro Road comes under county jurisdiction and will be reviewed by the county planning board. Board Attorney Thomas E. Kunz agreed.

The subject of the clubhouse did lead to a brief discussion, in which it was revealed that a wide range of uses could, theoretically, take place there including religious services.

“They can do what can normally be done within a clubhouse,” said York. “If they decide to have school one day a week, they can. That is controlled by the homeowners’ association.”

“There may be” church or synagogue services, he said, however the capacity of the building will be bound by code.

“Whether it’s a football party, a church service, a synagogue service or any other event, you’re required to comply with the occupancy requirements of the town,” he said.

Brian Murphy, the engineer on the project, testified that wildlife in the area will likely diffuse to nearby areas, including open space near the site.

“We’re developing the property and we’re being environmentally sensitive,” Murphy said. “We don’t know where the animals will go – maybe they’ll move to the open space.”

An open space area will be located in between the stream and the homes.

The board approved the development unanimously, in a 7-0 vote. York said the second half of the proposal may come before the board next year.