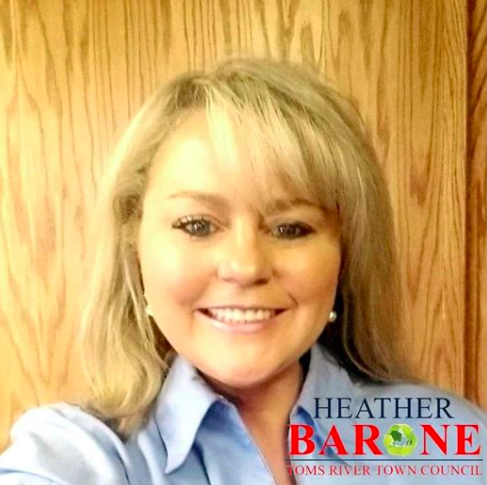 A member of the Toms River planning board who ran an unsuccessful campaign for the Republican mayoral nomination this year has given up her board seat over what she claims are harassment and threats received following a Facebook post she made in its aftermath.

Barone, who also holds seats on the Ocean County Library Commission and CASA (Court Appointed Special Advocates), posted a Facebook message after the votes were tallied that read, in part: “At the end of the day, voters voted for more overdevelopment and Orthodox votes. There is nothing we can change from that.”

Barone submitted a letter of resignation from the planning board that was read aloud by Council President George Wittmann at Tuesday night’s council meeting.


The post regarding overdevelopment was reposted on the Orthodox Jewish news website The Lakewood Scoop, which sources have said led to threats lodged against Barone’s family following its publication. Barone ran on a platform of limiting development in Toms River and her candidacy was opposed by many members of the Orthodox community, including Scott Gartner, who is seeking a change in zoning to build a synagogue on an 8-acre parcel where 10 acres are required under a zoning ordinance that was revised in 2009.

Gartner, who was at the meeting Tuesday night, called Barone a “fringe politician” during the public comment portion. Barone heavily criticized the winner of the primary, Councilman Maurice “Mo” Hill, for having “the Orthodox vote and money.” 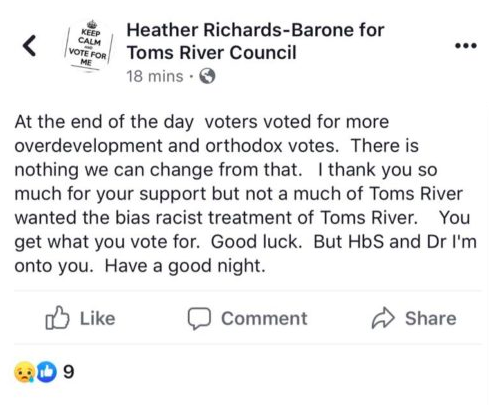 According to a message forwarded by Barone’s mother to the Rise Up Ocean County Facebook page, which opposes what administrators view as overdevelopment and political corruption in Lakewood, Barone was subject to “implied threats we have received via messages, emails, text and Face Book fake pages, seemingly by the same three or four individuals who do not use their real names.”

In the statement read by Wittmann, Barone said: “While I firmly stand behind the reasons for my post, I understand there was a better way to convey my disappointment in what I had come to find out.”

“I’ve been personally harassed, stalked and verbally attacked prior to, and before, this election process and it’s something I learned to adjust to,” the letter went on to say, but after the election, the threats became more serious.

The actions of those who opposed her candidacy and Facebook posts “puts into jeopardy the well-being and safety of my children,” she wrote.

Due to her candidacy and the positions she took during the campaign, she has also been conflicted out of several planning board cases and said she did not want to be a distraction for the board.

Gartner, who has spoken of a $500,000 “war chest” to fight a denial of his synagogue application based on the township’s revised zoning regulations, called on Toms River council members to ask her to resign her other two posts before adding that he would call on other officials to resign at the next meeting depending on what occurs over the next two weeks.

No members of council commented on Barone’s resignation or Gartner’s comments.