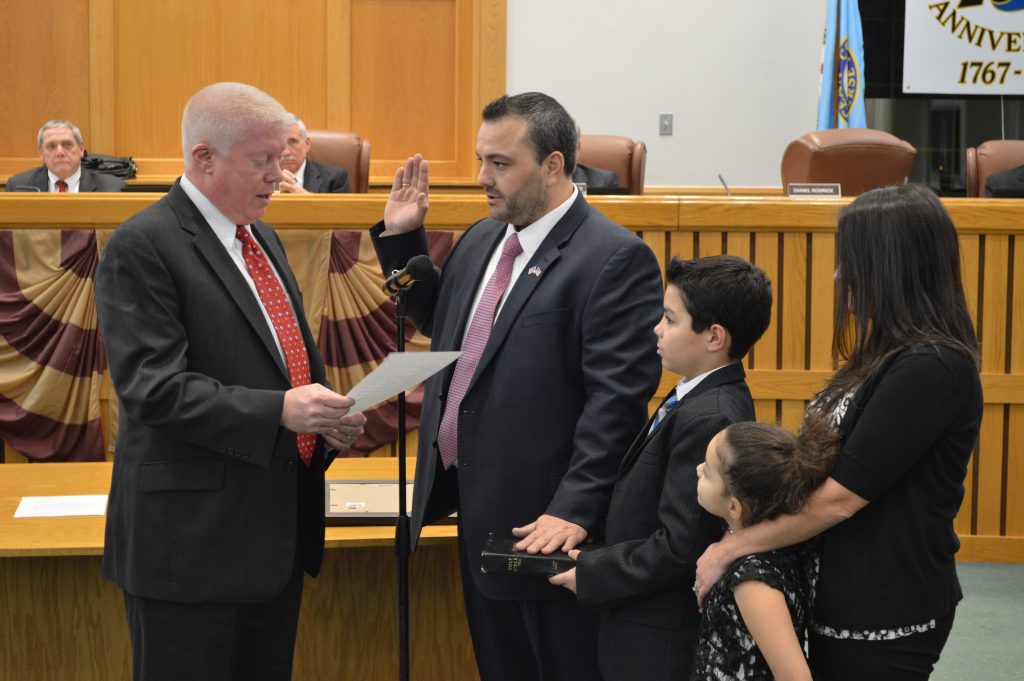 Holding the party declaration form up in the air from the dais, Councilman Daniel Rodrick announced he’d be switching parties and is becoming a Republican.

Citing his displeasure with Trenton Democrats, Rodrick, who is serving his first term on the council, said he would be leaving the Democratic Party. He made his announcement at tonight’s council meeting during council comments.

Rodrick, along with Terrance Turnbach and Laurie Huryk, ran as Democrats in the 2017 general election and became the first Democrats to win council seats in more than a decade in Toms River. That left the council makeup at three Dems and four Republicans — seen as a stunning win for the local Democrats.


With Rodrick’s switch, the majority of Republican control of the local governing body has grown to five out of seven seats. The council, and mayor’s seat, have been all Republican prior to that.

Rodrick, who represents Ward 2 in Toms River, said he is a fiscal conservative who previously had been a registered Republican for about 20 years.

He said he originally became a Democrat to make an impact locally, but could no longer associate himself with party platform at the national and state levels, specifically “taxes choking the middle class,” and the “dramatic cuts to suburban school aid.”

The council unanimously passed a resolution tonight decrying state aid figures for districts such as Toms River and Brick, and calling on State Senate President Sweeney to abandon the plan.

“To me the Democratic Party is out of touch with middle class issues and taxpayers,” Rodrick said, adding that he and his wife had went down to the election office to fill out the change of party declaration forms.

“In line with the conservative thinking in Toms River, we applaud Mr. Rodrick for making these observations in public on what we’ve been voicing our opinion on for the last year: taxes, taxes, and the school board just getting hammered,” said DiBiase.

He said that elected officials have been working together locally across party lines. “We’re addressing this in unison — opposing Sweeney and this state aid issue, which is really just terrible.”

“The Republican party may be a good fit for him, but it’s certainly the wrong fit for voters who rejected Republican patronage,” he said in his statement to Shorebeat. “While Dan plays politics, Councilman Turnbach and Councilwoman Huryk will concentrate on good government and continue to move Toms River in the right direction.”